I just love doing book tags and this one is a very fun one. Thank you so much Madeline from Mad’s Books for tagging me.

Find A Book For Each Letter in Your Name

H – House of Earth and Blood by Sarah J. Maas

I – I Am Change by Suzy Zail

A – All the Bright Places by Jennifer Niven

A – A Song Below Water by Bethany C. Morrow

Count Your Age Along Your Bookshelf – What Book Is It?

The book is Love, Simon (Love Simon: Simon Vs The Homo Sapiens Agenda) by Becky Albertalli. I have the movie version and I think it is so pretty. I did read this book a couple of years ago and I also watched the movie!

Synopsis
Straight people should have to come out too. And the more awkward it is, the better.

Simon Spier is sixteen and trying to work out who he is – and what he’s looking for.

But when one of his emails to the very distracting Blue falls into the wrong hands, things get all kinds of complicated.

Pick A Book Set in Your City/Country

The Sorrow of Belgium by Hugo Claus. I haven’t read it but it is considered as one of the classic masterpieces Dutch literature has to offer.

Synopsis
A classic novel in the tradition of The Tin Drum, The Sorrow of Belgium is a searing, scathingly funny portrait of a wartime Belgium and one boy’s coming of age-emotionally, sexually, and politically. Epic in scope, by turns hilarious and elegiac, The Sorrow of Belgium is the masterwork of one of the world’s greatest contemporary authors.

I have a hard time picking a book for this prompt. I mostly read science fiction and fantasy and those books have fictional destinations in them. The Kingdom of Back by Marie Lu is set in Austria, a country I haven’t visited yet.

Synopsis
Two siblings. Two brilliant talents. But only one Mozart.

Born with a gift for music, Nannerl Mozart has just one wish—to be remembered forever. But even as she delights audiences with her masterful playing, she has little hope she’ll ever become the acclaimed composer she longs to be. She is a young woman in 18th century Europe, and that means composing is forbidden to her. She will perform only until she reaches a marriageable age—her tyrannical father has made that much clear.

And as Nannerl’s hope grows dimmer with each passing year, the talents of her beloved younger brother, Wolfgang, only seem to shine brighter. His brilliance begins to eclipse her own, until one day a mysterious stranger from a magical land appears with an irresistible offer. He has the power to make her wish come true—but his help may cost her everything.

Pick A Book That Has Your Favorite Color In It

My favorite color is mustard. It’s like a dark yellow. The first book I can think of when thinking about the color mustard is Paper Towns by John Green. My version (the Dutch one) has a beautiful yellow cover.

Synopsis
Quentin Jacobsen has spent a lifetime loving the magnificently adventurous Margo Roth Spiegelman from afar. So when she cracks open a window and climbs into his life—dressed like a ninja and summoning him for an ingenious campaign of revenge—he follows. After their all-nighter ends, and a new day breaks, Q arrives at school to discover that Margo, always an enigma, has now become a mystery. But Q soon learns that there are clues—and they’re for him. Urged down a disconnected path, the closer he gets, the less Q sees the girl he thought he knew…

Which Book Do You Have The Fondest Memory Of?

The Legend series by Marie Lu! I think that series really got me into reading.

What was once the western United States is now home to the Republic, a nation perpetually at war with its neighbors. Born into an elite family in one of the Republic’s wealthiest districts, fifteen-year-old June is a prodigy being groomed for success in the Republic’s highest military circles. Born into the slums, fifteen-year-old Day is the country’s most wanted criminal. But his motives may not be as malicious as they seem.

From very different worlds, June and Day have no reason to cross paths—until the day June’s brother, Metias, is murdered and Day becomes the prime suspect. Caught in the ultimate game of cat and mouse, Day is in a race for his family’s survival, while June seeks to avenge Metias’s death. But in a shocking turn of events, the two uncover the truth of what has really brought them together, and the sinister lengths their country will go to keep its secrets.

Which Book Did You Have The Most Difficulty Reading?

Probably Glass Town Wars by Celia Rees. I just didn’t like the story and didn’t understand the world at all. 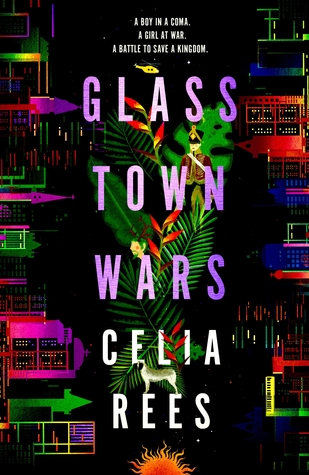 Synopsis
All these Glass Town intrigues. No matter how long you’d been absent, how far you’d travelled, once you were back, it was as though you’d never been away.

Tom and Augusta are from different places and different times, but they meet in the virtual world to combine forces in battle, to save a kingdom, escape a web of deceit and to find love. In a place where fictions can be truths and truths fictions, learning who to trust is more than friendship, it is about about survival.

Glass Town Wars, inspired by the early writings of the Brontës, is a captivating, magical novel by the renowned Celia Rees.

Which Book On Your TBR Will You Give You The Biggest Sense of Accomplishment When You Finish It?

The Priory of the Orange Tree by Samantha Shannon. I am so scared to start it for some reason. I know a lot of people love this book and I’m sure I will love it as well but it is so long (800 pages) and I’m mentally not prepared for that commitment right now lol!

A world divided. A queendom without an heir. An ancient enemy awakens.

The House of Berethnet has ruled Inys for a thousand years. Still unwed, Queen Sabran the Ninth must conceive a daughter to protect her realm from destruction – but assassins are getting closer to her door.

Ead Duryan is an outsider at court. Though she has risen to the position of lady-in-waiting, she is loyal to a hidden society of mages. Ead keeps a watchful eye on Sabran, secretly protecting her with forbidden magic.

Across the dark sea, Tané has trained to be a dragonrider since she was a child, but is forced to make a choice that could see her life unravel.

Meanwhile, the divided East and West refuse to parley, and forces of chaos are rising from their sleep.

Thank you Madeline for tagging me and I tag…

Ysa from Ysa, not Bella

Julie from Struck by Stories